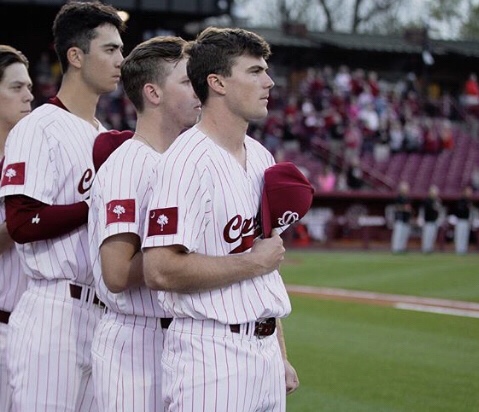 You may have seen our earlier post about our predictions for South Carolina’s conference opener against the Georgia Bulldogs. We thought there was a chance that we could win the series against Georgia. We were not wrong about there being a decent chance, but we just came short today.

Many members of Gamecock nation were frustrated to see that Reid Morgan would not be our Friday night pitcher. We ended up loosing big on Friday as the Bulldogs pitchers picked our batters apart. In the end the Bulldogs won the first game 6-1.

Wesley Sweatt gave up two runs early in the game then was replaced in the sixth when Georgia stretched the lead to 5-1. Being down four runs late in the game is tough to overcome, especially when the bats have been cold the entire night. It can be tough to get runs across when we struggle to get runners on base. Georgia’s defense kept us in check all night.

Game 2 started out great for south Carolina. Reid Morgan ended up taking the mound and did a great job keeping Georgia off the bases which allowed South Carolina to jump out to a 5-1 lead in going into the fourth inning. While I was watching this game I was starting to feel confident that the boys had turned the momentum for the entire series and could still pull off the series win.

The fourth inning shot down my hopes. Georgia cut the lead to one by the time we got the three outs we needed to stop the bleeding in the fourth however, by the time the sixth inning had come and gone, they had built a two run advantage over the Gamecocks. With three innings to go I still had hope that we could get a few runs across and steal the win back and give ourselves an opportunity to play for the series on Sunday. In the bottom of the eighth inning we drove one run in but were unable to score a tying run in the bottom of the ninth.

Overall game two between South Carolina and Georgia was much more competitive but the Gamecocks could just not get the outs they needed to stay on top of the Bulldogs. Hopefully we can steal game three and come out of the series with some positives.