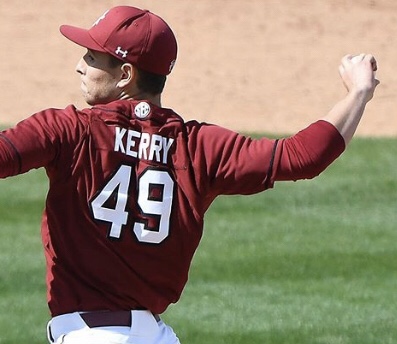 South Carolina Traveled to Starkville to take on the Mississippi State Bulldogs this weekend. The series was the last conference series for both teams and started on Thursday evening. The Bulldogs were heavy favorites over the Gamecocks who were tied for last place in the SEC going into the weekend. Mississippi State was the fifth ranked team in the country and it showed in game one on Thursday.

In the first game South Carolina was able to jump on top first scoring two unanswered runs, after that it was all Bulldogs. Mississippi State ran up a twenty four piece on the Gamecocks. The final score of game one was 7-24. The second game started the same way, South Carolina built up a small lead early but watched it dwindle and disappear as the game went along. The final score of the second game was 2-11. It seemed like if we could finish a game strong we had a chance to pull off a win in Starkville. That is exactly what happened in game three.

In the third game the Gamecocks jumped out to another early lead, this time only by one. Mississippi State later tied the game 1-1. Then things got a little out of hand. Both teams started scoring at a pretty decent rate back and forth. The final score of the game was 10-8 with the Gamecocks getting a huge win. Arguably one of the biggest wins of the season. With the win the Gamecocks broke the three way tie at the bottom of the SEC and advanced to the SEC baseball tournament in Hoover.

South Carolina’s game three win over Mississippi State had repercussions felt all over the SEC west. The win may not have clinched the series for the Gamecocks, but it did cause some issues for a couple of SEC west teams. The first team affected was Alabama. Alabama was the last team in for the SEC Baseball tournament as they had the tie breaker that would put them into the tournament over Kentucky and South Carolina. The Gamecock’s win over Mississippi State moved the us out of the tie and left Bama on the outside looking in. South Carolina’s victory over Mississippi State also pulled the Bulldogs out of the top spot in the SEC West. If State could have beat us they would have won the SEC West, but because they lost the third game, they ended up in second place.

Overall the lone win in the series against Mississippi State was a shock to a lot of people, but I will take it! The Gamecocks will take on LSU in Hoover on Tuesday.