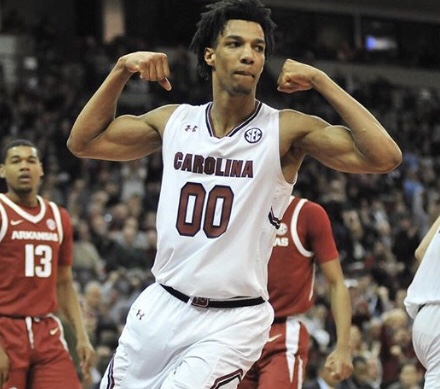 Basketball had a very up and down season last year. We saw a few freshman step up big throughout the season to help us salvage what little we could from what seemed like a horrible season. One of these freshman was AJ Lawson. AJ played incredibly well during conference play and helped the Gamecocks finish fourth in the conference. Although we did not make the tournament, AJ Lawson was a bright spot.

Interestingly enough, AJ Lawson has decided to enter his name into the 2019 NBA Draft. This is disappointing news for members of Gamecock nation. I am not too worried about loosing AJ to the NBA, I honestly think he will be back. As of right now AJ has not hired an agent so if he does not get drafted or receives no interest from scouts, he will still be eligible to play basketball for Carolina.

Will AJ Lawson Actually Get Drafted in the 2019 NBA Draft?

Like most other players it has been AJ Lawson’s dream to play in the NBA ever since he was a child. This is understandable but if he wants to get to the NBA and actually be successful he needs to develop. AJ enrolled early at South Carolina so he technically should have still been in high school last season. He should be in no rush to get to the NBA. Even if he does get picked up by a team he will likely play in the G-League for a few years before he gets a shot at the NBA.

More than likely AJ will realize that his chances at the NBA this year are slim and be back for his sophomore season. Playing under a coach like Frank Martin for a couple more years will prove to be more beneficial for AJ’s career than playing a few years in the G-League then being in the same position he would have been in if he stayed in college (with a chance that he might get to play in the NBA). I personally think the best move for AJ at the moment would be to work hard this off season and focus on becoming a better player, then taking over in his sophomore season. Then he will have a better shot at the NBA.

Nevertheless we wish AJ the best of luck with whatever he decides but we would love to have him back for a couple of seasons to develop into an even better player.