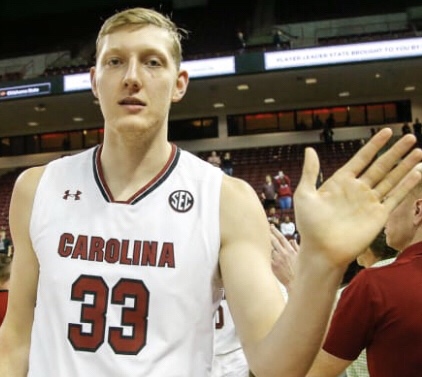 The tallest member of the South Carolina basketball team has announced his intentions to transfer from the university. His decision comes after limited playing time in his freshman season and missing all of his sophomore season due to injury. Jason did get a medical redshirt for his sophomore year and still maintains three years of eligibility; however, he plans on finishing up his college basketball career elsewhere.

Why Is Jason Cudd Transferring?

Jason has yet to make an official statement about the reasoning behind his decision to transfer. From what our sources have found out it is likely due to lack of playing time. He played in five games this year amassing a grand total of 23 minutes of playing time in those games.

Although his size at 7′ 1″ is very impressive, he just did not have the quickness and hands to earn a starting role on the team. He will be missed next season but we wish him the best of luck wherever his career takes him.

Where is Jason Cudd Transferring? Which School Will Jason Cudd Choose?

Jason Cudd will be leaving the South Carolina basketball team in search of a better fit. Jason has not made it clear where he intends to take his talents but we would imagine it would be a non power five program that is in search of a big man. Jason may even target a division II school so that he can get more playing time and play more of the game he loves.

It will be interesting to see where this big guy lands. Wherever he goes he is going to be a liability for any defense under the basket. He may not be 7′ 6″ like Tako Fall, but he has a lot of potential to develop and become deadly under the basket.

Who Will Replace Jason Cudd on South Carolina’s Basketball Team?

Jason Cudd was far and away the tallest member of the Gamecock basketball team. It will be hard to find another player that will be able to cause chaos in the paint defensively like Jason. We don’t have anyone on our current roster that is comparable size-wise to Jason, however his departure opens up a scholarship for Frank Martin to recruit another big time player that can contribute in the middle. On our current roster the closest thing we have to Jason Cudd is Maik Kotsar.