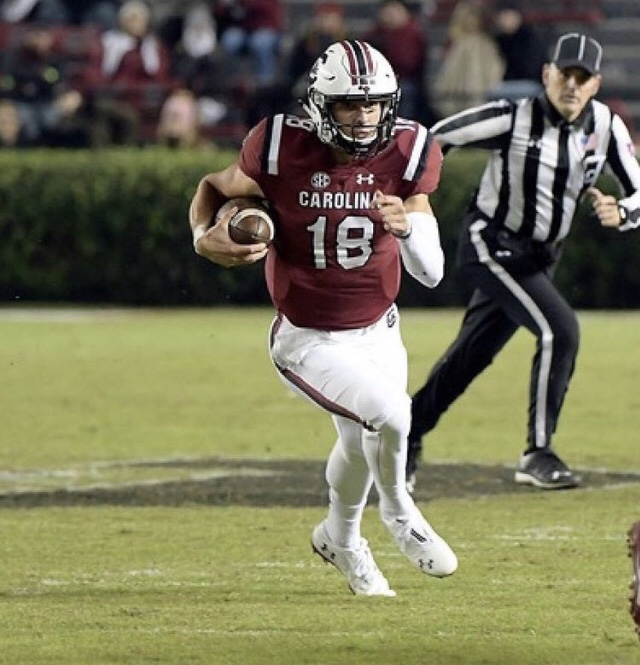 Last season South Carolina had plenty of options at quarterback. Everyone knew about Jake Bentley, Michael Scarnecchia, and Dakereon Joyner. Most people also knew about Jay Urich who played one series in the fourth quarter against UT Chatanooga. After Jay Urich there were a few other names at the Quarterback position. There was Bailey Hart, Darius Douglas, Drew Dinsmore, and Danny Gordon. Danny and Bailey were responsible for signaling plays during games. Danny also handled the place holding responsibilities for field goals. Drew Dinsmore literally just held Bailey and Danny’s helmets while they signaled plays.

Anyway for the 2019 season the quarterback room has changed drastically. Michael Scarnecchia has graduated, Darius Douglas has decided to transfer and surprisingly Jay Urich and Bailey Hart appear to have switched to play wide receiver. Bailey has officially made the switch to Wide Receiver permanently but we think Jay Urich may still be floating somewhere in the middle.

As of right now Jay Urich is splitting his duties. He has been working out as both a quarterback and a wide receiver. Jay is probably the second fastest quarterback we have and is also decently tall. He does not look out of place at the WR position. At the moment Jay is fourth in line at the quarterback position behind Jake, Dakereon, and Ryan Hilinski. Officially Jay will remain a QB on the Gamecock’s roster.

Jay Urich will continue to practice and work out as a QB but will start spending more time working with the WR group. In the spring game Jay had a couple of catches including a theatrical touchdown catch. He will likely see playing time as a Wide Receiver in 2019 but will still play QB guys start to go down.

Comment below if you would like to see Jay Urich get some snaps as a wide receiver this season!