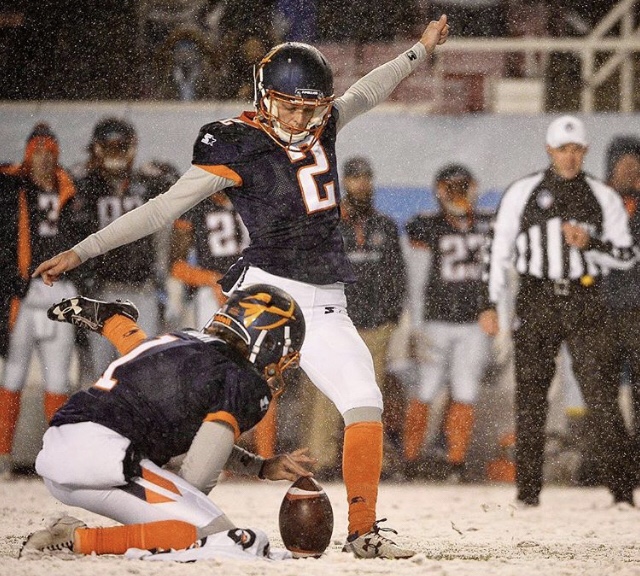 After Fry left Carolina he was unable to earn a spot on an NFL roster. For a few years he sort of just lived life, played a lot of golf, relaxed. Then once upon a time, this thing called the AAF called. Elliott was picked up by the Orlando Apollos who were coached by none other than Steve Spurrier.

Elliott Fry Impresses in The AAF

During the short life of the AAF, Elliott Fry and the Orlando Apollos dominated the league. Even though the inaugural season was cut short, the Apollos ended up with only one loss. In an interview Steve Spurrier even proclaimed the Apollos the champions of the leagues due to the fact that they had the best record of any team in the short history of the league.

Even more impressive than the Orlando Apollos record is Elliot Fry’s kicking game. Over the course of the AAF season, Elliot Fry was perfect. Elliot Fry was a perfect fifteen for fifteen on field goals. Three of these fifteen were over forty yards.

This impressive feat was picked up by scouts from a few NFL teams. One of which ended up offering Fry a three year contract to kick in the bigs.

Elliot Fry’s time in the AAF was brief but impressive. The bears thought that it would be nice to have a kicker that can knock in some field goals. One field goal attempt in particular from last season was especially painful for the Chicago faithful and knocked them out of the playoffs. Fry should be able to solve that problem for the Bears.

The Bears have signed Elliott Fry to a three year contract. There have not been any details released about the money involved but I’m sure Elliott is happy with any sort of income coming in. We look forward to watching Elliot Fry kick on Sundays!