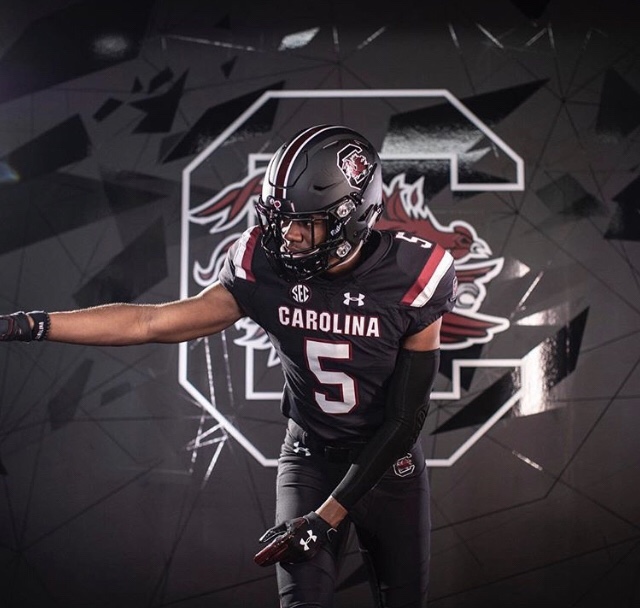 Recruiting for the 2020 class is well underway and the Gamecocks just picked up a big commitment. Wide receiver Mike Wyman from Dudley High School in Greensboro, North Carolina has committed to Carolina. If you are a Gamecock and don’t know much about Mike, you should get to know him.

After this upcoming season, the Gamecocks will be loosing a wide receiver you may have heard of before, Bryan Edwards. Bryan has been one of the most productive receivers for us during his time in Columbia. With Bryan finishing up his time at South Carolina the coaching staff has been looking for a tall receiver with some speed to fill Bryan’s cleats.

With the commitment of Mike Wyman, we may have found our replacement for Bryan Edwards. Wyman is currently listed as a 4-star wide receiver with a rating of .9402 which makes him one of the highest rated wide receivers ever to commit to South Carolina. His rating only a few thousandths of a point lower than some guy named Alshon Jeffery. Mike has a 6′ 4″ frame that will fill out great once he gets to campus. Although Mike is currently under 200 pounds, he will gain some weight once he gets to campus and gets on Dillman’s program. By the start of his freshman season we should see Mike at around 210 pounds.

Mike may not have a breakout season in his freshman year with the Gamecocks but he will develop into a very nice receiver for the Gamecocks. Hopefully Mike has the drive and passion to become an incredible player. Mike Wyman definitely has the frame and the hands necessary to write his name in the South Carolina Gamecocks Football history books. We look forward to the arrival of Mike on campus. If you haven’t already go give Mike a follow on social media and welcome him to Gamecock Nation!