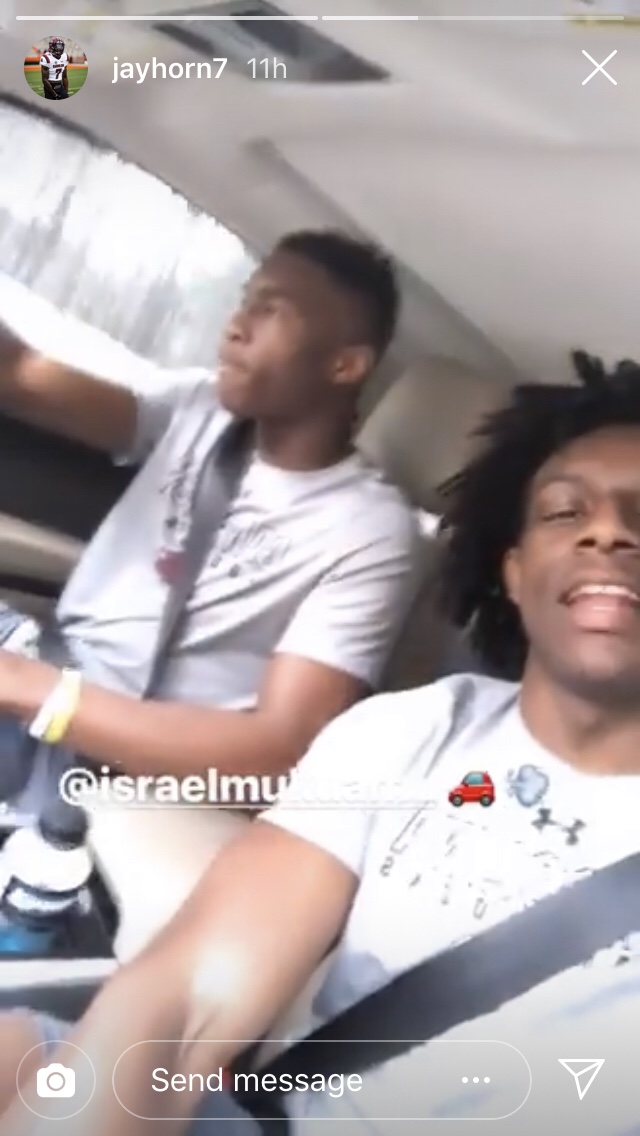 Jaycee Horn had a breakout Freshman season for the South Carolina Gamecocks in the 2018 season. He quickly became a fan favorite due to his aggressive and physical playing style and swagger. Jaycee has also gained a large following on Instagram. Fans are constantly keeping up with the star defensive back by watching his Instagram Story. On this page we will keep track of Jaycee’s notable Instagram Story Moments.

Jaycee Horn has been putting the new football operations facility through its paces this off season. Many a night Jaycee has spent hours practicing his cooking skills with teammates. He has gone live multiple times cooking steak while live streaming on Instagram. I’ll be honest at first his cooking did not look very good but his skills have improved. His most recent steak looked edible.

You can see Jaycee wearing his Under Armor script Carolina t-shirt as well as some surgical gloves to keep the seasoning from sinking into his skin while he prepares his steak.

Jaycee Horn has some of the best taste in music out of anyone in the South Carolina Football locker room. Jaycee is always dancing to music. During the pregame walkthroughs and warm ups, Jaycee is always dancing and having a good time. Jaycee captures many of his favorite songs in his Instagram story. Many fans wonder what song is playing in Jaycee Horn’s Instagram story. Below are some of the songs from Jaycee Horn’s Instagram Stories.

In the evening of March 20th, 2019, South Carolina cornerback Jaycee Horn was in the football operations center practicing some of the skills he learned in the cooking tutorial given to the entire team a few days prior. It appeared as though he was cooking up a nice juicy steak. While he was cooking Jaquaze Sorrells commented saying “you can’t cook”. Jaycee ignored this comment and kept whipping up his steak.

There was some music playing throughout the facility but it was not Jaycee’s feel. He requested that the music be changed to Gunna who is one of Jaycee Horn’s favorite rappers. Shortly after his request you could hear the music change to Richard Millie Plain, a song from Gunna’s Drip or Drown 2 album. Jaycee also makes a comment “When I come in here and hear Gunna I’m ready to practice on God.” Seems like Gunna gets the players in the right mind set.

On March 11th, 2019 Jaycee Horn posted a story that showed him driving a new Range Rover while listening to yet another song from Gunna’s 2019 album. Drip or Drown 2. This time it was easy to tell what song Jaycee was listening to on his Instagram story. While filming the story he showed the screen inside the car which displayed the name of the song being played.

One of Jaycee Horn’s favorite artists is Gunna. In fact, a majority of the South Carolina football team are fans of Gunna. On March 10th, 2019 Jaycee posted a video in the car listening to one of Gunna’s recent releases on his Instagram story. Jaycee was riding in Isreal Mukuamu’s car which may have been purchased at Lum’s Ford Lincoln in North Carolina. The song he was playing was Three Headed Snake which was part of Gunna’s Drip or Drown 2 album.

He was listening to the song with Isreal Mukuamu, who also plays defensive back and was part of the same recruiting class. As Gunna says “She feelin’ my brother, we swiggity-swap” Jaycee points the camera at Isreal who is also singing along to the song as well. These two are inseparable and spend a great deal of time together off the field. Isreal and Jaycee have made it clear that they want to be the best cornerback duo that South Carolina has ever seen. We will see how that plays out.