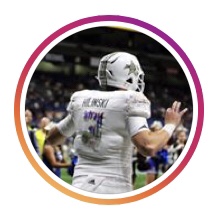 Ryan Hilinski is one of the most active South Carolina football players on social media. Ryan does a lot of promotion for his family’s foundation Hilinski’s Hope. This foundation has teamed up with the NCAA sports science institute to educate collegiate athletes on mental wellness. If you have not already heard about Hilinski’s Hope definitely check it out.

Below you will find some of Ryan Hilinski’s most notable Instagram Stories.

Ryan Hilinski posted a story a few weeks ago that featured him doing three burpees as part of the 3 for 3 challenge. The three burpees represented his brother Tyler’s jersey number at Washington State University. The story was posted to raise awareness for his family’s organization Hilinski’s Hope.