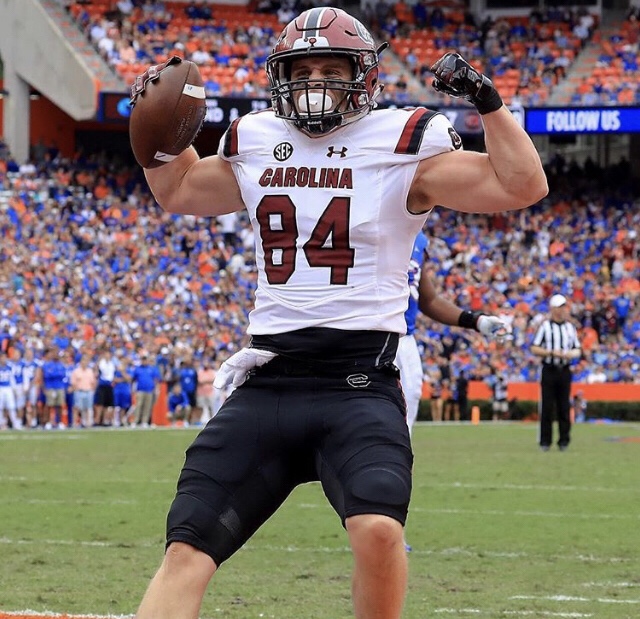 When we look back at some of the offensive weapons that South Carolina has had in the past, there are a few names that stick out at the tight end position. Two names in particular are Hayden Hurst and Jared Cook. Both of these tight ends are active in the National Football League.

I wouldn’t classify South Carolina as a tight end powerhouse but we do have some talent at the position. We have a few players that have shown glimmers of stardom in the past and could have breakout seasons in 2019. We also have some new freshman that can become big contributors this season.

Below you will find the preseason tight end depth chart for the South Carolina Gamecocks.

South Carolina will maintain a few tight ends from last season’s roster. The only tight end we will be loosing is Jacob August. We have three big names that will be returning from last season and should see substantial playing time in 2019.

Kiel had a great season overall in 2018. I believe he has a great opportunity to begin 2019 as the starting tight end. His intensity and physical playing style is a big boost to the entire offense. His size also allows him to block bigger linebackers.

Typically with size, you sacrifice speed. Although Kiel may not be a burner, he has enough speed to get separation in the secondary. He is no Hayden Hurst but he can get open in the seams. We saw proof of this in the game against Clemson last season.

K.C. has showed us glimmers of hope during his five year tenure at South Carolina. In 2018 he was our go to when we needed a tight end who could make plays out in the flat or running routes. He has had great moments throughout his career but last year was plagued with drops.

We expect K.C. to have a good senior year in 2019. Honestly the starting position is likely going to be earned by either K.C. or Kiel. We will see how the rest of spring goes and see how they perform in fall camp to see who will make the start against UNC in August.

Kyle Markway is a tight end who many fans were unfamiliar with until the Florida game last season when he caught a long TD pass to extend the lead. Kyle is physically similar to Hayden Hurst but does not have the speed. Markway has sure hands and is always a good target when the secondary fails to pick him up. He will get a decent amount of snaps in 2019 and could be a dark horse for the second team role for the Gamecocks.

Evan was a dual sport athlete who played both basketball and football for South Carolina. Although Evan saw much more playing time on the basketball court than he did on the football field, he decided he was going to give up basketball to focus on football.

Evan has the physical traits required to play tight end in the SEC however he struggles with drive. If Evan had Kiel’s fire, physicality and desire to play he could have a big impact. We will see where he falls in the 2019 depth chart but I imagine he will fill in the third or fourth team role.

We have yet to evaluate the incoming freshman tight ends but we will update when we have more solid opinions on them.