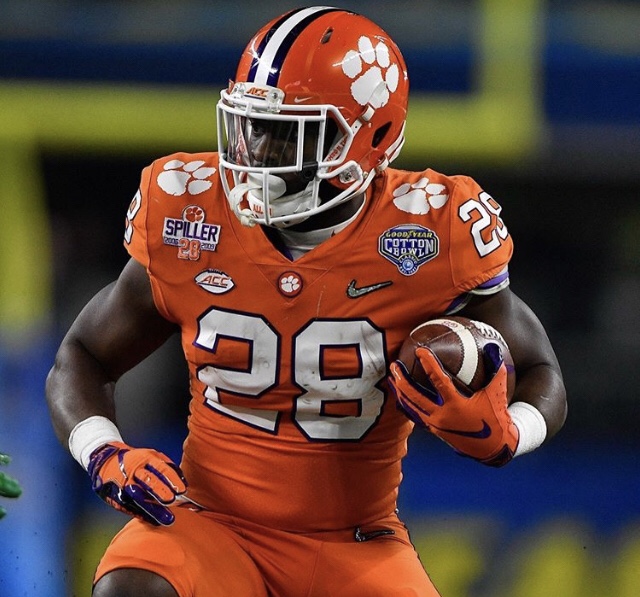 A few weeks ago Tavien Feaster announced his plan to transfer from Clemson. Many people were shocked by this decision as he was going to be heading into his senior season with the Tigers. Feaster was a big part of the Clemson offense amassing over 1300 yards and 15 touchdowns in his three seasons with the Tigers.

Why is Tavien Feaster Transferring From Clemson?

Although Tavien Feaster played a big role for Clemson, he was still a backup to Travis Etienne. Now that Tavien Feaster has graduated I’m sure he wants to play a bigger role in his final season as a college football player. Being a former five star recruit you can bet there are a lot of schools interested in having Tavien on their roster.

Pretty much every school in the southeast has some interest in landing Tavien. Recently the Gamecocks made it clear that they are actively pursuing Tavien. Wouldn’t that be something; transferring to a rival school or your senior year of eligibility. If Tavien does decide to come to South Carolina he would likely get the start. We don’t have a single running back on the roster that would sniff the field at Clemson. Our new running backs coach Thomas Brown could be a draw factor for Tavien. Coach brown has worked with running backs by the names of Todd Gurley, Nick Chubb, and Sony Michel. Tavien could benefit tremendously from spending a year with coach Brown.

It will be interesting to see where Tavien ends up. It would be awesome if he decided to come to South Carolina. Our young guys could really benefit from learning from a guy like that for a season.