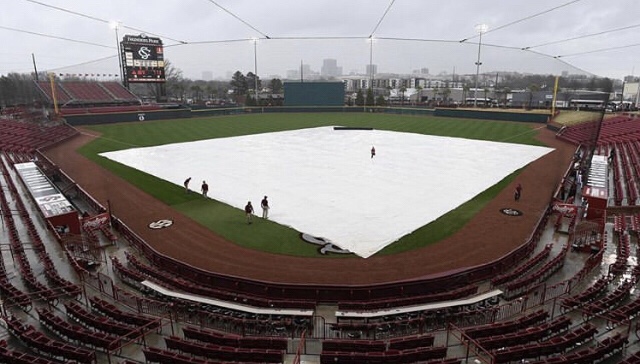 After a a late game rally to beat Winthrop yesterday 6-8 the Gamecocks will be welcoming Presbyterian College to Founders Park today at 4pm. We need to get off to faster starts if we want to be an elite team come conference play. If you can’t make it to the ballpark today you may be able to catch the game on TV or Radio.

UPDATE: Today’s game against Presbyterian has been cancelled due to weather. Be sure to catch the Gamecocks next game as they host Utah Valley. This game will be streamed on SEC Network+.

What Channel Will The South Carolina Presbyterian Baseball Game Be On?

The South Carolina baseball game against Presbyterian College will not be televised on any major networks. However, if you have access to SEC Network + you will be able to stream the game on your mobile device or smart TV.

If you don’t have access to SEC Network + try listening to the game on the radio.

What Radio Station is The South Carolina Presbyterian Baseball Game On?

If you don’t have the option to go to the game or watch the game on television there is no need to freak out. You can still listen to the game while you do household chores or work out. Here are the radio stations where you can listen to the South Carolina vs. Presbyterian baseball game: