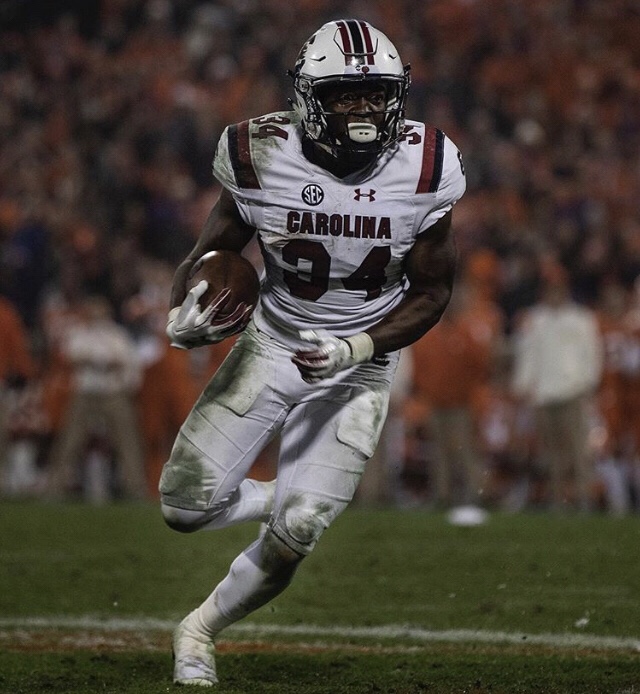 South Carolina has a few good options at running back coming into 2019. With new running back coach Thomas Brown at the reins, we may see better productions from our backfield in 2019. Coach Brown was a huge pickup for the Gamecocks this offseason. Brown was the coach that recruited and shaped a running back by the name of Todd Gurley if that name rings a bell.

Coach Brown has already stated that the best guy is going to get to carry the football. This is a big change from Bobby Bentley who felt as though it was necessary to give every RB touches in every game. We need to feed the hot hand and establish a starting running, a back-up, and a third man that can come in if necessary. The starting running back should receive the bulk of the carries. The question is, who will the starting running back be for South Carolina in 2019?

Before we can predict a starter lets take inventory of our backfield. The “starter” for the past few seasons has been Rico Dowdle. Rico has struggled with injury, turnovers, and drops recently but is a stocky solid runner. He does not have the breakaway speed that we need but he can be a bowling ball at times.

Mon Denson is a guy we believe has the best shot of being a starter in 2019. As long as he stays healthy he can make a big impact for us. I would like to describe his running style as being similar to a wind up car. He will find a hole and just run straight through it then keep running straight until he is met by the defense. Mon is also a strong runner capable of bullying defensive backs and initiating contact. Mon is a much more trustworthy back when it comes to turnovers.

Deshaun Fenwick was a new face in the 2018 season and saw limited action. In his lone appearance against UT Chattanooga, Deshaun rushed for over 100 yards and scored a touchdown:

These stats were run up in a little under a half which is pretty impressive for a guy who had little playing time throughout the season. Deshaun has a big body that is conducive to physical SEC football and is probably our biggest running back and is fast for his size. In the fourth quarter program so far we have seen Deshaun beating Dakereon in many of the running drills. I am excited to see how Deshaun develops the remainder of the offseason.

AJ Turner is a guy who could possibly get some snaps in 2019 but has moved to play defensive back. I hope he preforms well in that spot during his senior campaign.

Who Will Be The Starting Running Back For South Carolina in 2019?

It is a little early to say who will be the starting running back for South Carolina in the 2019 season. Until we see the running backs’ performance this spring we will have to wait to see how these three players develop under the influence of coach Brown.

Life of a Gamecock will be releasing a depth chart prediction for the Running Back position post spring game so keep your eyes peeled.