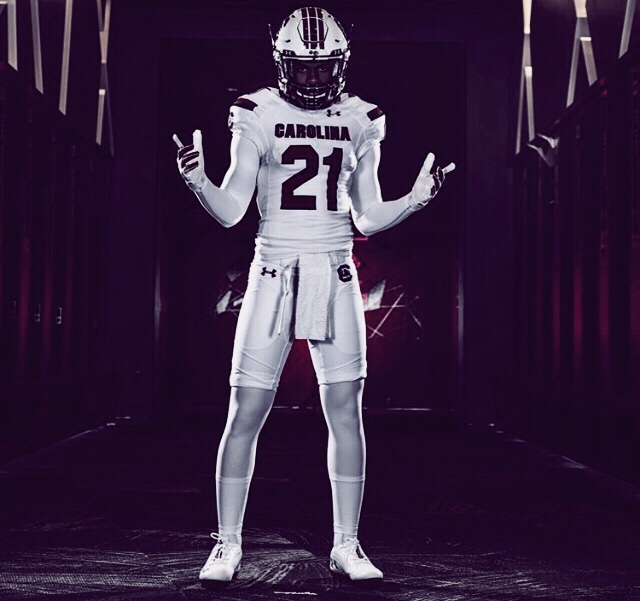 The South Carolina Gamecocks 2019 recruiting class ended up ranked 17th in the country and 8th in the SEC. These rankings are from 247 Sports so who knows how this class will actually stack up with the rest of the SEC.

The South Carolina secondary got a few big additions in the form of Cam Smith, Jammie Robinson, John Dixon and Shilo Sanders. Last year’s freshmen defensive backs saw a lot of in game action due to numerous injuries. We should expect solid secondary play in 2019. The question is, which freshmen will step up this spring/ fall and earn starting spots in Muschamp’s defensive backfield. Could the son of the great Deon Sanders start for the Gamecocks this upcoming season?

When Shilo announced his commitment to the University of South Carolina Gamecocks there were two different reactions. Some fans thought “Wow, the son of the great Deon Sanders is going to be a Gamecock!” and others thought “Well, Shilo Sanders is only a three star recruit… Big deal.”

Let’s be honest, 1 star or 5 star, does not guarantee success. The star rating system does not account for work ethic, drive and desire to be the best. Look at players like Deebo Samuel and DJ Wonnum, both were 3 star recruits walking onto campus and evolved into incredible game changing players. Shilo has this same upside.

If Shilo Sanders has half of the drive and work ethic his father has, we should see him develop into a very competitive defensive back. There are no guarantees that Shilo will earn a starting spot. He will have his work cut out for him. The freshman defensive backs from last year’s class saw a lot of playing time and will come into spring/ fall practice with a decent amount of in game experience. Isreal, Jaycee, and RJ all saw extensive playing time in 2018; I mean, Muschamp didn’t have much of a choice with all of the injury.

Anyway, back to Shilo. It is possible for him to start but he is going to have to work hard and beat out a lot of very talented defensive backs to earn the start. Even if he does not start it is very likely that he will be able to earn playing time in his freshman campaign. With the new redshirt rules he could get a decent amount of game speed experience and still maintain four years of eligibility starting in 2020.

Shilo Sanders has yet to enroll at the University of South Carolina and therefore has not officially joined the team in work outs. He is still finishing up his last semester of high school. Come July, that will change. As he prepares for fall camp. The secondary for the Gamecocks is very fluid, a lot of guys can play in different spots. It is very likely that Shilo could see playing time at safety and corner. It depends on what Muschamp and T-rob see from Shilo when he arrives on campus and starts competing against the other DBs.

Comment below and share your thoughts on the addition of Shilo Sanders to the South Carolina Gamecocks secondary.