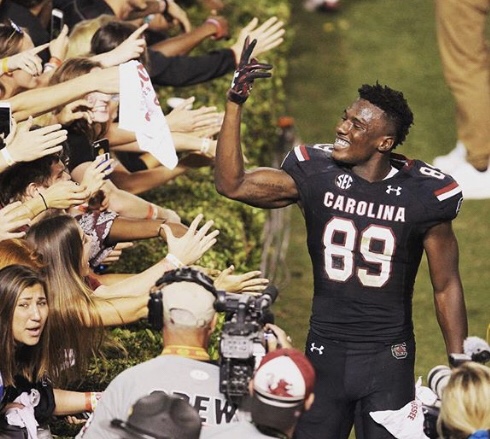 South Carolina has seen its fair share of talented wide receivers. From Alshon Jeffery to Deebo Samuel, the Gamecocks have had some big names come through the program. As of now Alshon Jeffery holds most of the wide receiver school records, this could change after the 2019 season.

Right now Bryan Edwards has 2,229 career receiving yards. Alshon’s record is 3,042 yards. This means that Bryan only needs to accumulate 814 yards this season to break the school record. Bryan has 16 receiving touchdowns in his career so far, the current record is 23 career touchdowns, this means that Bryan needs seven touchdowns to tie the record and eight to break it; both of these numbers are realistic. The current record for receptions in a career at South Carolina is 207. Bryan has 163 receptions so far meaning that he only needs 44 to tie the record and 45 to break the receptions record at South Carolina. If Bryan can average 3.75 receptions a game in 2019, he will break the record for career receptions.

What Needs To Happen For Bryan Edwards to Become The Best Wide Receiver Ever at South Carolina?

Breaking three school records is definitely within reach for Bryan Edwards in the 2019 season. All he has to do is average 3.75 receptions per game, About one touchdown every other game, and average 68 receiving yards per game. If he can do all three he will write his name in the Gamecock record books as the best wide receiver in school history.

With Deebo graduated and playing in the NFL our top three receivers are going to be Shi Smith, Ortre Smith, and Bryan Edwards. Bryan has always been one of Jake Bently’s favorite targets and with Deebo gone, Bryan will likely pick up a majority of the load typically put on Deebo. That combined with the load that is already expected of him, Bryan has a huge opportunity to make history at South Carolina.