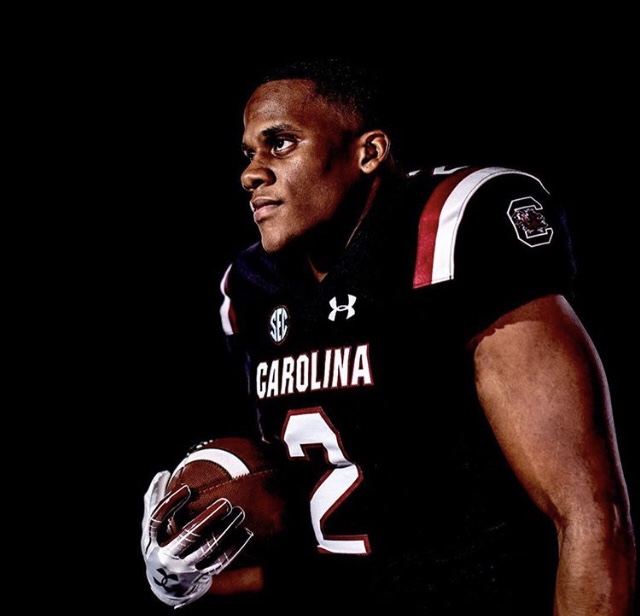 South Carolina is primed to have a huge recruiting class in 2020. Although they may not have a high number of commitments at the moment, they have a legitimate shot at some big time players. One of these players made his commitment today. Five star running back Marshawn Lloyd committed to the University of South Carolina today over Georgia, Penn State, and others. This kid is thick, fast, and not afraid of contact. Marshawn is the first five star back to come to Columbia since Marcus Lattimore and will make an immediate impact in our backfield when he arrives in 2020. It is time to celebrate with some cupcakes in Columbia, SC!

It has been a long time since South Carolina has had a running back that is a big threat. We have had a lot of solid guys but nobody that really played well consistently. Marshawn Lloyd is a 5-9, 206 pound running back that is just as physical as he is fast. The Gamecocks have missed having a guy that was physical between the tackles but also able to break away in the open field. We have had guys that are fast and guys that are physical but nobody that really gave us both threats in the same package. In 2020 Muschamp and B-Mac will have the weapon they have been looking for.

Why Did 5-Star RB Marshawn Lloyd Commit To South Carolina Over Georgia?

When Lloyd announced his commitment to South Carolina, he surprised a lot of people. Mainly fans from Georgia and Penn State. Other big time college football fans were also shocked. Many fans made statements that Georgia’s recruiting budget must have run out and not been able to pay for Marshawn.

The truth is South Carolina provides a talented running back with a pretty nice setup. As soon as Marshawn sets foot on campus, he will be in the running for the starting running back spot. He will get plenty of touches and playing time his entire career and will not have to share the backfield with another high profile back. If Marshawn were to commit to Georgia he would have to share the backfield with a few other highly rated running backs.

Another big reason South Carolina is a great choice for a highly talented running back such as Marshawn Lloyd is the presence of running back coach Thomas Brown. If you are a running back recruit right now you have grown up watching talented running backs like Todd Gurley, Nick Chubb, and Sony Michel develop into some of the best backs in the NFL. Thomas Brown had a lot to do with their success. Brown coached all three of those backs at Georgia and developed them into incredible players. Couple the opportunity to be coached by one of the best RB coaches in college football with the opportunity to make an impact day one and get serious playing time in the SEC and there is no wondering why Marshawn Lloyd chose South Carolina over other programs. It just makes sense.

We look forward to having Marshawn Lloyd on the team and cannot wait to see him in garnet and black. Go welcome Marshawn to the Gamecock family on social media!